PURPOSE: The aim of this study was to compare the long-term outcomes of laparoscopic surgery with those of open surgery in patients with stage Ι∨ colorectal cancer.

CONCLUSION: Laparoscopic surgery seems to be a safe and feasible option, with long-term benefit for primary tumor resection with stage Ι∨ colorectal cancer, although the difference was not statistically significant. 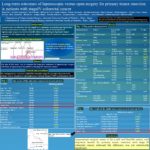