Introduction: The traditionally high recurrence rate after laparoscopic repair of intrathoracic stomach has been reduced by use of mesh to reinforce the crural repair. We previously described a simplified technique for crural reinforcement using Vicryl mesh and Bioglue, with an acceptable recurrence rate at 1 year compared to other studies using mesh secured with sutures or tacks. The aim of this study is to assess outcomes in a larger series with long-term follow-up and determine the rate of recurrence.

Methods: The charts of all patients who underwent this repair from June 2006 to June 2013 using the previously described technique were retrospectively reviewed. Intrathoracic stomach was defined as >50% of the stomach herniated into the chest. Follow-up assessment was routinely performed at 1 year intervals, including endoscopy, video esophagram, and GERD-health-related-quality-of-life (HRQL) questionnaire. Recurrence was defined as any identifiable hiatal hernia on either EGD or VEG.

Conclusion: Laparoscopic intrathoracic stomach repair with crural reinforcement using Vicryl mesh and Bioglue proves to be effective, safe and durable, with excellent symptomatic results, and a high degree of patient satisfaction. The rate of recurrence tends to plateau over time with the majority of recurrences being small-moderate and asymptomatic. 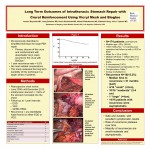