INTRODUCTION: Per-Oral Endoscopic Myotomy (POEM) is now a well accepted treatment for esophageal achalasia. Optimal treatment for symptomatic patients with non-achalasia motility disorders (NAD) is not well established. In the past surgical interventions have been discouraged due to inconsistent and often morbid outcomes.  POEM has been offered to these patients since it is a less invasive and less morbid procedure but long-term outcomes remain undetermined. The aim of this study was to assess long-term outcomes of POEM for patients with NAD.

METHODS: Records of 40 consecutive patients undergoing POEM for NAD from May 2011 to January 2016 at a single center were retrospectively reviewed. Preoperative and 6 month post-operative symptom scores, high-resolution manometry (HRM), and timed barium swallow (TBS) data were collected. Routine 24-hour pH studies were offered postoperatively. Patients were contacted by phone to obtain long-term symptom assessment. Symptoms were assessed using a standardized symptom questionnaire with scores for symptoms graded according to frequency and the Eckardt score. Success was defined as symptoms less than weekly and an Eckardt symptom score < 3.

RESULTS: There were no major operative complications. Eleven percent had minor complications. Ninety percent of patients had significant improvement in their mean Eckardt scores (5.02 vs. 1.12, p<0.001) at early follow up. Improvements in chest pain (1.02 to 0.36, p=0.001) and dysphagia (2.20 vs. 0.40, p=0.001) were seen. Significant improvements in manometric pressures and esophageal emptying on timed barium swallow (TBS) were observed across groups. Long-term (median 48-months) symptom scores were obtained from 29 (72.5%) patients. Eighty percent of patients (24/29) had sustained symptom improvement.  A small increase in the dysphagia score was reported (0.36 to 0.89, p=0.046). Over the long term follow up, six patients underwent additional endoscopic dilations and one had a laparoscopic Heller myotomy for persistent symptoms. Six out of 40 (15%) patients developed new onset heartburn while 5 out of 40 (12.5%) experienced worsening of their previous heartburn symptoms. Objective increased acid reflux was seen in 15% (endoscopy or pH study).

CONCLUSIONS: Chest pain and dysphagia are effectively palliated with POEM in patients with non-achalasia disorders of the esophagus. Significant improvements are durable in long-term follow up. Despite earlier reports by our group suggesting possible inferior outcomes from POEM for this difficult group of patients, this study is far more encouraging. POEM should be considered in the treatment of patients with non-achalasia disorders of the esophagus. 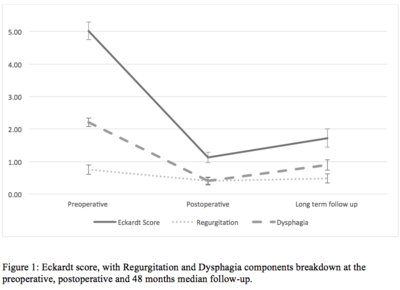