INTRODUCTION: Subtotal cholecystectomy, where the infundibulum of the gallbladder is transected to avoid dissecting within a heavily inflamed triangle of Calot, has been suggested as a method to conclude laparoscopic cholecystectomy while avoiding common bile duct injury.  However, some case reports have suggested the possibility of recurrent symptoms from the remnant gallbladder.  This retrospective case series reports a minimum of two-year follow-up on patients who underwent subtotal cholecystectomy within one four-hospital system.

METHODS: A retrospective chart review database containing 900 randomly selected cholecystectomies, all of which occurred between 2009 and 2015, was reviewed to identify all instances of subtotal cholecystectomy.  Charts for these patients were reviewed through 09/2017, including any documentation from other providers, including primary care.

RESULTS: Six patients who underwent subtotal cholecystectomy with a remnant of infundibulum left following surgery were identified.  Surgical approach and the choice to perform subtotal cholecystectomy were dependent on the attending surgeon; all decisions were made intraoperatively.  There was an average of 70 months of follow-up for these patients within our institution. 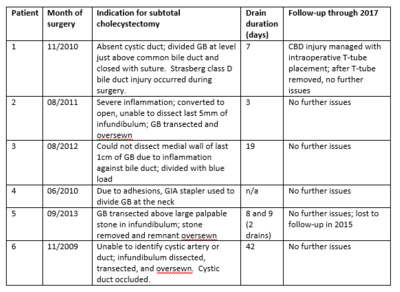