The creation of sufficient peritoneal flap during laparoscopic transabdominal preperitoneal (TAPP) inguinal hernia repair without parenchymal injury is essential, but can be technically challenging. Liquid dissection technique might help to facilitate the blunt dissection and to reduce parenchymal injury. We describe this technique for TAPP hernia repair and report our experiences.

We performed 6 cases of TAPP inguinal hernia repair with liquid dissection technique from July to September 2013. After trocar placement and diagnosis of hernia type, 60ml of 0.3% lidocaine with 1:300,000 dilution of epinephrine is injected percutaneously under laparoscopic vision into preperitoneal space (Hesselbach’s triangle, above and below lateral triangle) to dissect the preperitoneal space (figure). The initial incision of peritoneum is performed at lateral side of the inguinal canal, followed by blunt dissection of the preperitoneal space until the following landmarks become visible: pubis symphysis medially, aponeurosis of transverses abdominis cranially and anterior superior iliac spine laterally. Adequate parietalization of the vas deferens and gonadal vessels is performed. A polypropylene mesh is finally placed in appropriate position and fixed on Cooper’s ligament with two tacks, followed by the closure of the peritoneal flap using a continuous absorbable suture. Data are resented as median and interquartile range.

The median age was 72.5 (61- 84.5) years old, and 4 of 6 were male. The median ASA class was 1.5 (1- 2). One patient had bilateral direct inguinal hernias, another patient had unilateral direct hernia and the other 4 patients had unilateral indirect hernias. The median operative time, injection time and dissection time were 128 (113- 179.5), 5.3 (4.7- 5.9) and 46 (40- 48) minutes respectively. The median estimate blood loss was 7.5 (3.8- 10) ml. All cases were performed by a resident without TAPP experiences. This procedure made enough space between peritoneum and the spermatic structures, and the preperitoneal space was dissected without difficulty. No intraoperative injury or conversion to laparotomy was observed. There was no hernia recurrence after a median 13.5 (10- 20) days follow-up.

The liquid dissection technique for laparoscopic TAPP inguinal hernia repair might be feasible to facilitate dissection of preperitoneal space and reduce injuries of vas deferens and gonadal vessels. 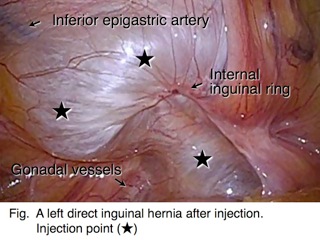