Introduction: The robotic platform is increasingly utilized for bariatric procedures, but the learning curve has not been well described.  We aimed to evaluate perioperative morbidity and operative times for robotic sleeve gastrectomy (RSG) and robotic Roux-en-Y gastric bypass (RRYGB) based on number of procedures performed.

Methods and Procedures: Retrospective review was conducted of all adult patients undergoing RSG or RRYGB by a minimally invasive fellowship-trained surgeon in his first two years of attending practice at a Bariatric Center of Excellence (2015-2017). Linear regression fit lines over number of procedures performed were constructed to describe learning curves for RSG and RRYGB. Operative time was compared within procedure to our institutional averages for patients undergoing laparoscopic sleeve gastrectomy (LGS) or laparoscopic Roux-en-Y gastric bypass (LRYGB). Residents and fellows participated in an analogous fashion in both arms of the study, and patients undergoing re-operative bariatric surgery were excluded.

There were no conversions to open. There was one patient with portal vein thrombosis after RSG which occurred in the 84th RSG and one patient who underwent re-operation in the immediate post-operative period for hemorrhage at the gastro-jejunal anastomosis in the RRYGB group; this occurred in the 8th RRYGB. There were no leaks, strictures, or mortalities in either group. Mean length of stay was 2 days +/- 1 for RSG with no difference based on number of procedures performed. In the RRYGB group, LOS decreased after the first five procedures from 3 days +/- 1 to 2 days +/-1 (p = 0.04).

Conclusions: We show that equivalence in operative time to LSG and LRYGB was rapidly achieved using the robotic platform by a fellowship-trained bariatric surgeon in an institution’s first years of robotic bariatric practice. Perioperative morbidity was minimal throughout the study period. 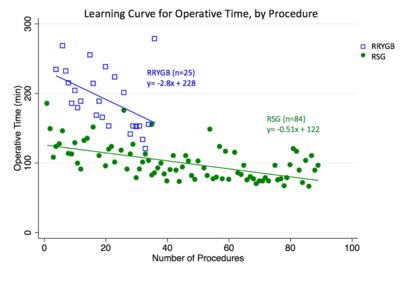