Conclusion:The three phases identified in this study represent characteristic stages of the surgeon’s learning curve for robotic colorectal procedures. Phase I represents the true learning curve phase which was found to be 15 cases. The phase II plateau represents increased competence with the robotic technology. Phase III was achieved after 25 cases and represents the mastery phase in which more challenging cases was performed. 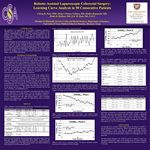