Introduction: Laryngo-pharyngeal reflux (LPR) refers to symptoms caused by backflow of gastric contents to the larynx and pharynx. Concurrent pH recordings at increasing distances above the LES are reported to show a linear decrease in acid exposure as the distance from the LES increases. While abnormal distal esophageal acid exposure is common in patients with LPR, abnormal proximal esophageal acid exposure in the absence of abnormal distal reflux has also been reported. The aim of this study was to assess if patients with proximal reflux alone have different physiologic characteristics of the lower esophageal sphincter (LES) and the esophageal body than patients with combined proximal and distal reflux. Subjects and Methods: Patients who underwent combined proximal and distal pH monitoring and esophageal motility studies were identified, excluding those studied on antireflux medication and those with previous foregut surgery. Abnormal reflux was defined based on % total time less than 4 (> 4.4% in the distal and >1% in the proximal esophagus). Patients were classified into three groups (1) isolated distal reflux (2) isolated proximal reflux (3) combined reflux (abnormal at both levels). Manometric and demographic factors were compared between the group with isolated proximal reflux and the group with combined reflux. Results: A total of 359 (171 males) had abnormal esophageal acid exposure. Median age was 54(45-64) and median (BMI) 27.2(24.2-29.9). There was a strong correlation between % time pH < 4 in the distal and proximal in the whole study population (r=0.56, p 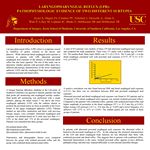