Laparoscopy in the Developing World: Perceptions of Patients At Komfo Anokye Teaching Hospital, Ghana About Laparoscopy

Background: Laparoscopy has become the gold standard for many surgical cases in the developed world. It however, remains a rarity in developing countries for several reasons, a major one being cost. This study aimed to determine the knowledge and attitude of Ghanaian patients toward laparoscopic surgery and their willingness to pay for it.

Methods: Patients attending specialist outpatient clinics at the Komfo Anokye Teaching Hospital (KATH) in Kumasi, Ghana were interviewed using a structured questionnaire designed to elicit demographic information and the patients’ knowledge and preferences regarding laparoscopy. If patients were unaware of laparoscopic surgical options, an explanation was provided. The patients’ choice of either laparoscopy or open surgery and the reasons driving their choice was sought. For those who preferred laparoscopy, their willingness to pay more than baseline cost of open surgery was assessed. Logistic regression analyses were done to assess whether age, sex, highest educational level attained, home location, job category, and previous surgery had an impact on their choice of laparoscopic surgery and also on their willingness to pay for it.

Results: 1070 patients participated in the study. There were 562(52.5%) females. Mean age was 40.5±15.3. 60.4% of them had completed basic education or less. 53.6% lived in the city. 85.9% were either engaged in hourly-paying jobs or unemployed. None of them had a history of laparoscopic surgery. Thirty-one patients (3%) had some knowledge about laparoscopic surgery. When presented with a choice between open and laparoscopic surgery, 95% of patients preferred laparoscopy most commonly because of faster recovery and less post-op pain. Under univariate analysis client age (≤45years vs >45years), educational status (basic or less vs senior high or higher), history of previous surgery and history of previous abdominal surgery showed a significant association with their choice. On multivariate analysis , age>45 years (AOR=0.53, p=0.03) and education level of senior high or higher (AOR=2.00, p=0.04) were significant predictors of client choice.
Among those who preferred laparoscopy, 78% were willing to pay some amount above the baseline cost of open surgery for laparoscopy. Multivariate analysis showed that history of previous abdominal surgery (AOR=0.67, p=0.02), having a salaried job compared to being unemployed (AOR=2.36, p<0.01) and living in the city compared to the village (AOR=1.78, p=0.04) were the significant predictors of patients’ willingness to pay more for laparoscopy.

Conclusion: The overwhelming majority of patients attending specialist outpatient clinics in KATH will prefer laparoscopy if the option is made available to them. A high proportion of patients are also willing to pay for the service. Public education on laparoscopy is thus needed to increase general awareness. Health facilities wishing to provide patient centered care should anticipate an increase in demand by acquiring the necessary equipment and supporting staff training. 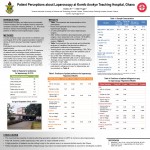