CONTEXT: Minimally invasive surgery is considered the gold standard for some surgical diseases. Often the preferred technique, laparoscopy for splenectomy has not been studied in randomized or large observational trials.
OBJECTIVE: To evaluate the potential benefits of laparoscopic over open splenectomy.
DESIGN, SETTING, POPULATION : Analysis of a United States nationwide voluntary surgical outcomes database. All 1909 splenectomies performed electively for splenic disease between January 2005 & December 2008. Trauma, emergencies, and splenctomy for iatrogenic injuries were excluded.
OUTCOMES: Odds ratio of death among those who underwent laparoscopic splenectomy after controlling for age, gender, ethnicity, and preoperative pulmonary, cardiac, renal and hepatic co-morbidities. Odds ratio of pulmonary, cardiac, wound and thromboembolic complications.
RESULTS: Our sample consisted of 1909 splenectomies where 1094 (57%) were laparoscopic. The study participants were 53% female and 47% Caucasian with a mean age of 54 years. The most common indication for splenectomy was idiopathic thrombocytopenic purpura (30.3%) . The crude mortality was 2.6%. On unadjusted analysis, odds of death were 50% lower in the laparoscopic group (p=0.01). This difference disappeared after adjusting for co-variates (OR 0.82, 95% CI (0.5 – 1.6), p=0.6). Patients undergoing laparoscopic splenectomy were 41% less likely to experience pulmonary complications (95% CI (0.4 – 0.9), p=0.01) and 39% less likely to experience wound complications (95%CI (0.4 – 1.0), p=0.05). There was no difference in cardiac events between groups (OR 0.98, 95%CI (0.4 – 2.5), p=0.9) but there was a trend towards 43% less thromboembolic disease (95%CI (0.3 – 1.0), p=0.06)
CONCLUSIONS: Laparoscopic and open splenectomy groups had comparable mortality. Laparoscopic splenectomy is associated with less pulmonary and wound morbidity, and possibly less thromboembolism. Significant improvements in patient outcomes can be achieved through the use of laparoscopic instead of open splenectomy. 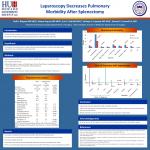