METHODS : There were 85 patients who underwent LAG were individually matched to 85 patients who underwent OG between October 2004 and March 2008 at Sir Run Run Shaw Hospital. Beyond the patients’ demographic data (age and gender), extent of gastrectomy and lymphadenectomy, as well as differentiation and TNM stage of the tumor are as matched index. The operative time, intraoperative blood loss, postoperative recovery, complications, pathological findings, and follow-up data were compared between the two groups.

CONCLUSIONS: LAG is suitable and minimally invasive for treating gastric cancer. Compared to OG, the LAG does not increase the risk of recurrence and death after surgery. 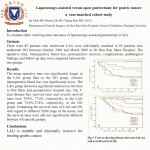