Laparoscopy Assisted Repair of Diaphragmatic Herniation After Esophagectomy for Carcinoma of the Esophagus : A Report of a Case

Case Report : A 63 year-old female underwent a thoracolaparoscopic esophagectomy, posterior mediastinal gastric tube reconstruction, and 3-field lymph node dissection for thoracic esophageal cancer. The patient complaint was upper abdominal discomfort and constipation at 3 years after operation. A computed tomography (CT) showed a finding of diaphragmatic herniation of tranverse colon into the chest. Laparoscopic repair of the diaphragmatic defect was planned.

Operative technique : The patient was placed in a lithotomy position. A midian 7cm incision was made at the upper abdomen along to the scar of previous operation. Laparoscopic observation revealed the esophageal hiatus had enlarged, and served as a hernia orifice. The transverse colon prolapsed into the left thoracic cavity. The dimension of the hiatal defect was about 3×3 cm. The herniated transverse colon was reduced easily due to lack of dense adhesions to thoracic cavity, but was firmly adherent to the hernia orifice. The edges of the defect were approximated with interrupted nonabsorbable sutures using the intracorporeal suturing technique. A 16 Fr intercostal drain was inserted. The operating time was 150 minutes and blood loss was 4ml. The patient was discharged on the sixth postoperative day and followed for 6 months without evidence of hernia recurrence.

Discussion : Although a diaphragmatic hernia following esophagectomy is rare, it is a potentially life-threatening complication. In the present patient, the repair can be done safely by HALS procedure, before the development of intestinal obstruction and strangulation. To our knowledge, this type of procedure is extremely rare for diaphragmatic hernia after esophagectomy. We will show our clinical practice. 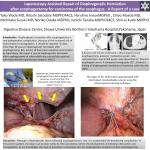