Background: Of those patients with middle-third early gastric cancer, it is still difficult to determine which procedure is superior between laparoscopy-assisted pylorus-preserving gastrectomy (LAPPG) and laparoscopy-assisted distal gastrectomy (LADG) in spite of several alleged functional advantages of LAPPG.The purpose of this study is to compare the surgical/oncologic safety and the nutritional benefit of LAPPG and LADG for middle-third early gastric cancers (EGC).

Methods: A retrospective analysis was performed comparing those who underwent LADG with a distal resection margin of ≥ 5cm (n=176) to those who underwent LAPPG (n=116) for primary gastric adenocarcinoma from January 2003 to June 2011. To evaluate surgical and oncological safety, clinicopathologic differences including the lymph node metastasis pattern, the postoperative morbidity and recurrence patterns were analyzed. To compare nutritional states, area-based anthropometric quantification of abdominal adipose tissue was performed using single-slice abdomen CT.

Results : The overall postoperative morbidity rate was similar between LADG and LAPPG. Delayed gastric emptying was found more frequently in LAPPG than in LADG (7.8% vs. 1.7%, P=0.015); however, the rates of all other complications were significantly higher in LADG than in LAPPG (17.0% vs. 7.8%, P=0.023). The number of examined lymph nodes as well as metastatic lymph nodes at each lymph node station was not significantly different between LAPPG and LADG. There was no recurrence in LAPPG. The postoperative area of abdominal adipose tissue was significantly more decreased by LADG than LAPPG (-43.5% vs. -22.2%, P=0.001, for visceral fat and -35.2% vs. -24.5%, P=0.024, for total fat)

Conclusions : For middle-third EGC, LAPPG can be considered as a better choice of treatment than LADG 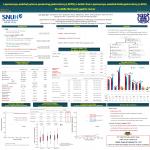