The technique we describe is different than that described for idiopathic thrombocytopenic purpura ( ITP ) spleens where splenic mobilization has been performed first.
Early isolation of the major blood supply allowed removal of massively enlarged spleens with minimal blood loss and exposure of the major vessels was not technically challenging. The use of preoperative splenic embolization has been reported but does not appear necessary if splenic blood supply is controlled early.

Technique of laparoscopic splenectomy for massive splenomegaly
The patient is supine position. Two 10-mm ports and three 5-mm ports are used to allow repositioning of the camera for visualization of the hilum and also the lower pole.
1. Dissection of the inferior aspect of the spleen and the splenic flexure of the colon is then mobilized to give access to the lower pole of the spleen.
2. Dissection of short gastric vessels ( for exposed splenic hilum clearly )
3. Controlled splenic artery and vein respectively with suture ligated and then with endoclips
4. Dissection of the lateral and retroperitoneal attachments
5. Removing the spleen

Result : The five patients underwent successful laparoscopic assisted massive splenectomy with minimal blood loss. All of them are thalassemia major. No transfusion of packed cells in our patients. There were no complications. There was no mortality. Length of stay varied between 4 and 7 days.

From our limited initial experience it seems that laparoscopic splenectomy in the difficult setting of massive spleen patients is feasible as safe as the open approach.
But extreme care is required in order to avoid hemorrhagic complication.
We believe the technique of early hilar devascularization is the key to safe bloodless dissection of the massive spleen. This early experience is encouraging. 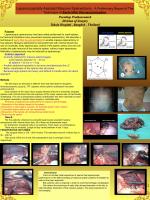