Laparoscopic Wedge Resection of the Stomach for Early Gastric Cancer

Background. Sentinel lymph nodes (SLNs) mapping has been recently introduced to the field of gastric cancer. The aim of the present study was to evaluate laparoscopic wedge resection of the stomach for early gastric cancer with lymphatic basin resection.
Methods. Eleven patients with cT1N0M0 gastric cancer were enrolled. Endoscopic injection of patent blue dye was performed during operation. Laparoscopic wedge resection of the stomach with lymphatic basin resection was performed in all patients. Dissected nodes were evaluated by pathologic examination(HE stain).
Results: The mean operaion time and bleeding blood loss was 271.0 minutes, 131.7ml. SLNs were identified successfully in all cases. The mean number of identified SLNs per case was 3.9, and dissected lymph nodes per case was 10.5. There was no postoperative complication. The mean postoperative hospital stay was 10.8 days. With a median follow-up of 45 months, no recurrent case was observed.
Conclusions: Laparoscopic wedge resection of the stomach with lymphatic basin resection may be an acceptable option for patients with early-stage gastric cancer. We plan to study this operative method further in gastric cancer with cT1N0. 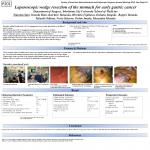