Laparoscopic vs. Open Splenectomy: the Impact of Spleen Size On Outcomes

Background: Although Laparoscopic Splenectomy (LS) has become the standard of care for small to moderate spleens, Open Splenectomy (OS) is still recommended by many in cases of splenomegaly. We set out to assess the impact of spleen size on LS and OS outcomes using a national database.

Methods: We reviewed NSQIP database to identify patients who had undergone non-emergency splenectomy during 2005-2009. To evaluate the impact of spleen size on outcomes we considered patients with diagnoses of splenomegaly and hypersplenism as those having large spleens (Large-Sp group) and patients with post-operative diagnoses of primary thrombocytopenia and immune thrombocytopenic purpura as those having small spleens (Small-Sp group). Student’s t-test, Chi-Square and Fisher exact test were used, and regression analysis performed to control for confounding variables.

Results: We identified 484 patients in the Large-Sp and 731 patients in the Small-Sp groups. During 2005-2009 laparoscopic approach was consistently used in over 80% of cases in Small-Sp group. Although the rate of LS increased in the Large-Sp group during the study period, it remained below 50% (Figure 1). In the Small-Sp group, LS led to less transfusion, shorter hospital stay, lower complications and mortality (Table 1). These advantages were gained at no increase in operative time. Patients in the Large-Sp group who underwent LS also had less transfusion, shorter length of stay, lower morbidity and mortality but longer operative time (Table 1). In regression analyses, surgical approach (laparoscopy vs. open) was a significant predictor of length of stay, controlling for age, gender, BMI and ASA in both Large-Sp and Small-Sp groups (p<0.001).
In patients who has undergone laparoscopic splenectomy, those with a large spleen had higher blood transfusion (0.4 vs. 0.2 units, p=0.001) and longer operative time (153 vs. 118 minutes, p<0.001) but similar length of stay (4.5 vs. 4.1 days, p=0.4), morbidity (12.8% vs. 9.0%, p=0.1) and mortality (0.5% vs. 1.4%, p=0.5).

Conclusions: LS leads to significant improvement in outcomes. These advantages have traditionally been believed to be limited to small sized spleens, but this study demonstrates that improved outcomes can be seen even in patients with a large spleen, at the expense of a modest increase in operative time. We hope such data encourages wider utilization of LS in the setting of splenomegaly, which is presently used in less than 50% of cases. 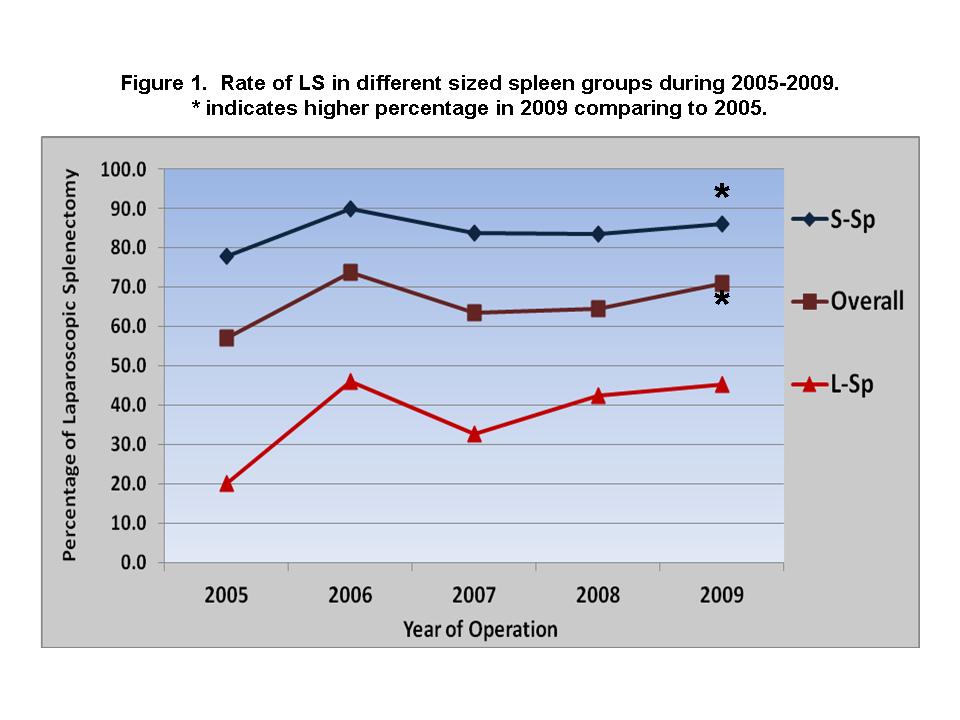 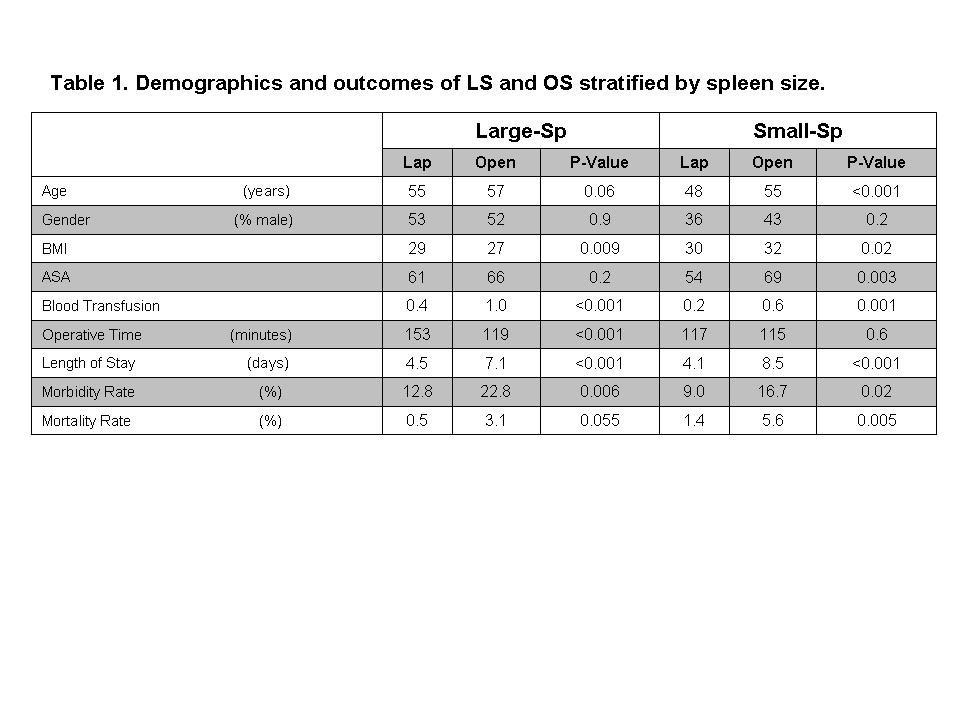