Objective: To measure the short and long term surgical outcomes of laparoscopic rectal cancer surgery at a cancer hospital in a lower middle income country.

Methods: All patients with a diagnosis of rectal cancer from Jun 2006 to Jun 2015 were studied. Patient demographics were recorded. Short term surgical outcomes were recorded. Oncological factors indicating an adequate surgical resection were identified. Successful resection was defined as having negative linear and radial margins and a complete TME. LN yield was also recorded. Post op complications were also compared. 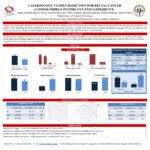