Introduction: Laparoscopic approach for rectal cancer has gained acceptance due to the short term advantages of minimally invasive surgery and similar long term oncologic results. In our country several centers have adopted the technique but short and long term results are lacking. The aim of this study is to compare short term surgical and pathologic results, long term disease specific (DSS) and disease free survival (DFS) in patients submitted to radical surgery (anterior resection of the rectum or abdominoperineal resection) via laparoscopy or laparotomy for rectal cancer.

Method: Historic cohort study. Patients who underwent elective, curative radical resection for rectal cancer between August 2005 and May 2012 were included. Patients with local or simultaneous liver resection were excluded. Categorical variables were analyzed with chi square o fisher exact test; numeric variables were compared with Man Whitney or t test depending on their distribution. Survival function DSS and disease free DFS survival were estimated with the Kaplan – Meier method. The survival curves were compared with the Log Rank test.

Conclusion: In our series, laparoscopic approach for rectal cancer has similar surgical results compared to conventional surgery in terms of morbidity and reoperation rate. The laparoscopic approach has longer surgical time, but a lower postoperative hospital stay. Long term oncologic results did not differ between the two surgical approaches. These results are similar to the reported elsewere. 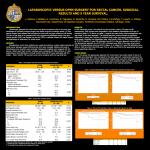