Introduction: We present a case of a patient with a history of achalasia and subsequent repair who presented with recurrent episodes of retrograde gastroesophageal intussusception. Retrograde gastroesophageal intussusception (RGEI) is a rare cause of gastrointestinal obstruction in which all layers of the stomach invaginate into the esophagus. There are few case reports of RGEI in the published literature. Risk factors include long mesenteric gastric attachments, repeated episodes of increased abdominal pressure, or enlarged gastroesophageal openings. Treatment ranges from endoscopic reduction to laparotomy with intra-abdominal fixation.

Case Report: A 22 year-old male with a prior medical history of achalasia underwent a laparoscopic Heller myotomy at an outside institution. Six months later the patient presented with vague abdominal pain associated with nausea and emesis. A computed tomography (CT) scan revealed RGEI which had resolved by the time upper endoscopy was performed. No further interventions were performed at that time.

The patient was transferred to our institution several months later with a similar episode of epigastric pain and emesis. A CT scan showed a majority of the stomach herniated into the distal esophagus with dilatation and air-fluid levels. There was no evidence of gastric edema but vascular compromise was noted. Upper endoscopy was then performed during which the intussusception was successfully reduced. A percutaneous endoscopic gastrostomy tube was placed during the endoscopy to prevent future recurrence. The patient’s abdominal pain improved immediately and he began tolerating a regular diet. Follow-up CT imaging revealed complete resolution of the intussusception. The gastrostomy tube was removed after 6 weeks.

Discussion: Although rare, retrograde gastroesophageal intussusception is an important clinical entity. The patient’s history of achalasia and subsequent Heller myotomy led to an enlarged gastroesophageal opening which was likely the main contributing factor in his development of RGEI. Endoscopy is appropriate initial management for reducible intussusception. In the presence of recurrence, incarceration or strangulation, however, endoscopic intervention is likely insufficient and can be treated with laparoscopic management. 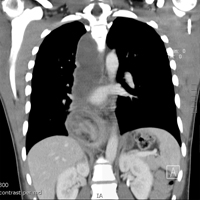