Objective: The optimal surgical approach for Siwert type II cancer is still controversial due to the anatomical complexity of the region. Potential advantages of laparoscopic transhiatal approach have not been fully investigated.

Methods and procedures: We retrospectively analyzed 55 consecutive patients with Siewert type II cancer who underwent laparoscopic transhiatal resection. Indication of surgery is patients with Siewert type II cancer with less than 3 cm esophageal invasion. Regarding the extent of resection, basically proximal gastrectomy with the lower esophageal resection was selected, aiming at preservation of gastric reservoir function. In terms of reconstruction after proximal gastrectomy, double-tract method was performed. Intraoperative peroral endoscopy was routinely employed for determination of the appropriate resection level of the stomach. Esophagojejunostomy was employed by overlap method using a 45mm linear stapler. In order to obtain a wider operative field in the lower mediastinum, the diaphragmatic crus was dissected to widen the esophageal hiatus.

Results: In 55 patients (38 males and 17 females), median operation time was 282 minutes, and estimated blood loss was 18 g. The rate of surgical morbidity was 18%, and that of anastomotic leakage was 4%. There was no mortality. The mean length of proximal margin was 10 mm, and no positive margin was recorded. The 3- and 5-year overall survival rate was 96.1% and 75%, respectively.

Conclusions: Laparoscopic transhiatal resection for Siewert type II cancer is technically challenging, but appears feasible and safe when performed by an experienced surgical team. A large-scale prospective study is necessary for final conclusion. 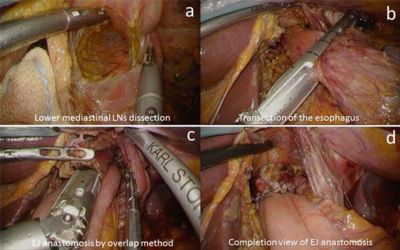