Laparoscopic total gastrectomy (LTG) for adenocarcinoma is a widely diffused operation in Eastern Countries but there are only few reports from Western centers (mostly focused on partial/distal gastrectomy). The aim of this study was to assess safety of the surgical procedure, adherence to the oncological principles (margin clearness and lymph node clearing) as in open surgery and mid-term survival.

We evaluated the short- and mid-term outcome of patients undergoing LTG for adenocarcinoma between june 2005 and october 2012. Perioperative morbidity included any minor/major, medical/surgical complication.

Out of 45 patients referred for total gastrectomy for adenocarcinoma, 24 patients underwent open surgery or immediate conversion after explorative laparoscopy, for advanced disease (bleeding, perforated or bulky mass, with infiltration to the adjacent organs, including pancreas or colon). The remaining 21 patients (11M:10F) formed our study population. Their median age was 65.6 years (IQR:58-71). The median operative time was 240 min (IQR:210-300). R0 resection was obtained in all patients and the median number of lymph nodes retrieved was 39 (IQR:33-48). Median tumor diameter was 3 cm (IQR:2-4 cm). All patients had a D2 lymphadenectomy. There were 9 (42.9%), 5 (23.8%) and 7 (33.3%) patients stage I, II and III, respectively. Mortality and overall morbidity rates were 0% and 42.9%, respectively, including 1 leak (requiring reoperation, 4.8%), 3 abdominal abscesses (1 drained radiologically, 2 treated with antibiotics) and 2 deep vein thrombosis with pulmonary embolism. According to the Dindo-Clavien classification, we had seven grade II, one grade IIIa and one grade IIIb complications, respectively. Median follow-up was 39 months. Median overall and disease-free survival was 94.7% and 72.3%, respectively, at 3 years.

Short- and mid-term outcomes of LTG for adenocarcinoma, even in a community hospital setting, are good in terms of safety for the patients and respond to oncological criteria used in open surgery, with good mid-term survival results. 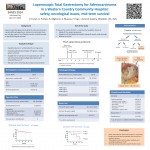