Background: Single port laparoscopic surgery is a modified access technique that allows total colectomy and end ileostomy for medically uncontrolled ulcerative colitis solely via the stoma site incision. While intuitively appealing, there is sparse evidence for its use beyond feasibility.

Methods: All patients presenting either electively, urgently or emergently over a 32 period at a tertiary referral centre under three specialist teams were studied prospectively. One team commenced its operative cohort via single access laparoscopy via the stoma site on a near-consecutive basis using a ’surgical glove port’ as compared to a conventional four trocar, multiport approach. This allowed cohort comparative and case control analysis. Standard, straight rigid laparoscopic instrumentation were used and no additional resources were allocated.

Results: Of 45 consecutive patients presenting for surgery, 38 (83%) had their procedure begun laparoscopically. 27 patients (67%) were commenced by single port access with an 88% completion rate (3 were converted to and completed by multi-trocar laparoscopy). Overall, single port access proved significantly more effective in comparison to multiport access regardless of disease severity (significantly reduced access cots, operative times and postoperative length of stay, p<0.05) but was especially efficient for patients with preoperative albumin >30g/dL (n=20). This was further confirmed by formal case-match analysis (10 pairs matched for gender, BMI and preoperative albumin).

Conclusions: Single port total colectomy proves routinely useful in both planned and acute settings for patients with medically refractory colitis especially in non-toxic patients. Assumptions regarding duration and cost should not be barriers to single port techniques. 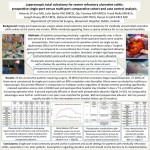