Background:Laparoscopic surgery (LS) for colon cancer has been widely accepted as a feasible treatment. However, there is still controversy in the laparoscopic TME for lower rectal cancer.
Purpose:We evaluated feasibility of laparoscopic surgery for lower rectal cancer comparing with open surgery (OS) from the surgical results of a tertiary referral center in Japan.
Method:Clinical and follow-up data of 248 patients with lower rectal cancer from January 2006 to March 2012 were retrospectively analyzed. The study design was a case-matched control by propensity scoring. Analyzed variables were gender, age, Body Mass Index, American Society of Anesthesiologists score, operative procedure, TNM stage.
Procedure:Conventional 5-port method was performed in LS. Dissection was begun with the medial-to-lateral approach, taking care to identify and preserve the left ureter and gonadal vessels. Total mesorectal excision was performed in all cases. A double-stapling technique was applied using endoscopic linear staplers (1 or 2 times), and a circular stapler. Lateral lymph node dissection was performed in T3 or T4 lesion .
Result:Ninety-one patients were performed laparoscopic surgery, 157 patients underwent open surgery. After performing score-matching, 94 patients were selected (47 patients respectively) . The mean intra-operative blood loss was significantly lower in LS(277ml) compared with OS(546ml)(p=0.036). The mean operation time was not significantly different in both groups (301 vs. 281min). Number of retrieved lymph node were higher in OC compared with LS ( 32 vs 23, p=0.007). There were no differences in the mean distal resection margin for each group (22.9 vs. 21.3mm). There was no patient having positive circumferential resection margins in both groups. Postoperative complication rate(>GradeIII) was 6.4% in OS and 12.7% in LS(N.S.). Anastomotic leakage rate was not significantly different in both groups. Mortality rate was 0% in both groups.
Conclusion:According to this short-term study, laparoscopic surgery for lower rectal cancer showed equivalent safety, and morbidities to open surgery. 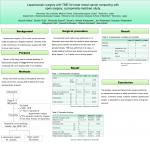