Department of Surgery, The University of Tokushima

Background: Cases of liver cyst with symptoms, such as jaundice, abdominal pain, and intracystic infection, do required treatment. In laparoscopic deroofing of liver cyst, appropriate treatments are needed in the cases with cystic walls containing vessels or bile ducts. On the other hands, Liga Sure (Vessel sealing system: VSS) can seal not only vessels, but also bile duct very well. We experienced 3 cases to be performed deroofing of liver cyst by using of VSS.

Conclusions: A Laparoscopic deroofing using of VSS can be a noninvasive and safe treatment for liver cyst because VSS can seal not only vessels but also bile duct very well. 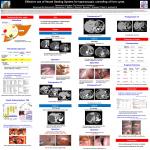