Introduction
Technichal skills are essential in the practice of surgery. Performance evaluation throught objetives metrics is important to be used for formative and sumative assessements. Motion analysis represents an area of focus. We proposed a low-cost and readily available method to evaluate movement patterns based on accelerometers of the iPOD touch device of Apple Inc®.

Results
The analysis of the average acceleration and peak acceleration showed statistically significant differences between both groups in both “y” axis (p=0.04, p=0.03) and “z” axis (p=0.04, p=0.04) demostrating the method capability to distinguish between experts and novices. The analysis and comparison of these variables in “x” axis showed no significant diferences between groups which could be explained by the fact that the task involves few movements on “x” plane.

Conclusion
The accelerometer based analysis of movement patterns allows to distinguish individuals with different laparosopic skills level. Therefore it would be a useful tool for assessing the skills development of surgeons in training. 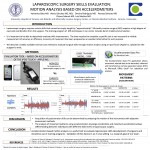