Laparoscopic Surgery In Gastric Cancer: Why Aren’t We There Yet?

Patients and Methods:
14 patients who underwent laparoscopic surgery for gastric cancer were evaluated in terms of surgical technique, oncologic and surgical outcomes and complications.
Results:
There were 10 male and 4 female patients. The mean age of the patients was 56(35-70) years and tumors were located in gastric antrum in 4 patients, antrum-corpus in 2 patients, cardia in 3 patients, corpus-cardia in 3 patients and corpus in 2 patients. One patient had T1, 4 patient had T2, 6 patients had T3 and 3 patients had T4 tumors. 6 patients (2 Female) with antral tumors received distal subtotal gastrectomy (STG) plus D1 (1), D1.5 (D1 α, β) (3) and D2 (2) lymph node dissection. The remaining 8 patients (2 Female) received total gastrectomy (TG) plus D1.5 (D1 α,β) (2) or D2 (8) lymph node dissection. 4 of the 8 patients that received TG underwent concomitant splenectomy. For the patients that underwent STG the mean dissected lymph node numbers were 8 nodes in D1, 15,3(9-22) in D1.5 and 48(28-68) in D2. On the other hand; TG-D1.5 dissection had a mean dissected lymph node number of 21(16-26) and for TG-D2 it was 40(20-62). There was one patient with subhepatic abscess in the postoperative period. Abscess was drained subcutaneously and an enterocutaneous fistula developed that was treated with endoscopic Tisseel® application in postoperative 21st day. One patient with anastomotic stricture was treated by a single dilatation session in postoperative 2nd month.
Conclusion:
Total or subtotal gastrectomy with D1 (D1α, β) dissection can effectively and safely performed laparoscopically without compromising the oncological principles. However; there are still technical problems for D2 dissection and it requires experience. In addition to all, lymph node dissection groups should be redefined for laparoscopic approach. 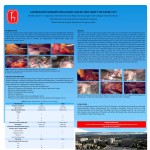