[Backgrounds] Laparoscopic colorectal cancer surgery has been widely accepted because of less pain, faster recovery and good cosmetic results. Although several authors presented results of prospective studies which support advantages of laparoscopic colorectal cancer surgery, an oncological validity of this surgery is not well analyzed yet, specially for advanced cancer. The aim of this study is to assess the clinical outcome of the laparoscopic surgery for Dukes C colorectal cancer in our hospital retrospectively. [Patients and Methods] During June 1999 and Dec. 2007, we operated 408 cases of colorectal caner laparoscopically. Of those 101 cases were confirmed as Dukes C with a pathological evaluation. Among these cases, we assessed an operative time, estimated blood loss, and clinical outcome, retrospectively. [Results] Male female ratio was 58:43, and mean age of these patients was 62 year-old. Among these cases, 31 tumors were located in the cecum or ascending colon, 3 in the transverse colon, 1 in the descending colon, 38 in the sigmoid colon, and 28 in the rectum. According to the Japanese classification of colorectal cancer, D1 nodes dissection was performed in 1 case, D2 in 30, and D3 in 70 cases. Mean operative time was 180 min., and mean estimated blood loss was 53 ml. Five cases were converted to open procedure. Postoperative complication was observed in 9 cases, and 1 patient died of MOF due to anastomotic leakage. Mean number of harvested lymph node was 24. Pathological tumor depth was as follows: T1 20, T2 16, T3 56, and T4 9 cases. Seventy-seven cases were confirmed as pN1, 22 as pN2, and 2 cases as pN3, respectively. Thirty-six tumors were well-differentiated adenocarcinoma, 55 were moderately-differentiated type, and por/muc type was only found in 5 cases. Tumor recurrence was observed in 21 cases. Twelve cases developed liver metastases, 5 lung mets, 3 lymph-node mets, and 1 tumor dissemination. Nine cases died of cancer relapse. Overall five-year survival was 87% in Stage IIIA/B, 83% in IIIC. Meanwhile Disease-free five-year survival was 75% in Stage IIIA/B, 73.9% in IIIC. [Conclusion] Although further evaluation is mandatory, laparoscopic surgery for Dukes C colorectal cancer is safe and oncologically adequate procedure. 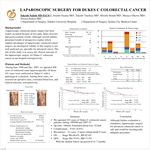