Laparoscopic hernia repair is now widespread. Many report recommended prosthetic mesh repair. There are several advantages, which are reduction in postoperative pain and recurrence, and disadvantage which is infection.
We report a case of hernia in the linea alba, which was treated by laparoscopic direct suture closure in young female patient. A 25-year old lady visited our hospital because of occasional abdominal mass in the upper midline when patient was exercising. We examined by ultrasonography and computed tomography. Defect of the linea alba, which size was 7mm, was detected by only ultrasonography. There is only adipose tissue in this defect. The laparoscopic operation was performed. We put three trocars in the lower abdominal area which was covered by under wear. We dissected hepatic ligament and detected small defect of linea alba which was the same area marked before operation by ultrasonography. Three subcutaneous direct suture were made by intracorporal from inside without skin incision. Bleeding was minimum and operating time was 135 min. Patient recovered rapidly and returned to unrestricted activity quickly. There have been no sign of recurrence up to now.
Most of laparoscopic hernia repair cases use prosthetic mesh right now. But laparoscopic direct suture closure is also good procedure for small defect of linea alba in young patient ,especially young lady who has a possibility of pregnant and other disease of abdominal organ. 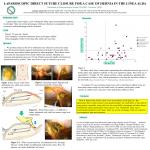