Laparoscopic Sleeve Gastrectomy Is an Effective Treatment for Gerd Symptoms

Introduction:  Laparoscopic sleeve gastrectomy (LSG) is an increasingly popular and effective bariatric procedure.  However, it’s effectiveness in treating GERD has been questioned. Some studies have even demonstrated worsening GERD symptoms. Our objective was to investigate the effect of LSG on GERD symptoms (GS) in our patient population.

Methods: Retrospective review of prospectively collected data of a single surgeon’s, LSG series (excluding revisions) between 2008 and 2013.  Routine PPI’s were not used postoperatively. GERD symptoms and medications were recorded preoperatively and postoperatively at 3, 6, and 12 months. Symptoms were categorized as either resolved (asymptomatic off medications), improved, or worse. Patient demographics presence and repair of hiatal hernia, and %EWL were also recorded. All patients with at minimum of 3 months follow up were included.

Conclusion: The vast majority (82%) of patients in our study with pre-existing GERD symptoms had improvement or resolution of their GS after LSG. Only 2.7% of asymptomatic patients developed GS after LSG. Our findings indicate that LSG rarely leads to new onset or worsening of GERD based on patient reported symptoms . Further studies are required to determine the endoscopic and quantitate (pH study) changes in GERD after LSG. 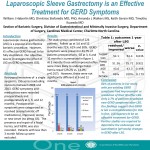