Background: Although inflammatory bowel disease (IBD) is thought of as a wasting disease it sometimes coincides with obesity. Laparoscopic sleeve gastrectomy (LSG) is an effective primary procedure in morbidly obese patients. The safety and effectiveness of LSG in IBD patients have not been reported, nor has a definitive treatment of choice been established. Therefore, the aim of our study is to determine the safety and effectiveness of LSG for morbid obesity in IBD patients.

Methods: A retrospective review of a prospectively maintained database in patients undergoing LSG for morbid obesity from November 2004 to December 2010 was undertaken. A total of 546 patients underwent LSG in this period, 10 of whom (1.8%) had a history of IBD. Seven (70%) patients had Crohn’s disease and 3 (30%) had ulcerative colitis. Measurements of hemoglobin, hematocrit, total protein, albumin, calcium, iron, vitamin B1, B12 and folate were obtained at baseline and 6, 12, 24 and 36 month after LSG.

Results: Eight (80%) patients were female and 2 (20%) were male. The mean age was 40.3. The preoperative mean weight and BMI were 124.4 kg and 45.6 kg/m2. The percentage of excess body mass index loss (%EWL) was 70.2% at 6 months in 10 patients, 86.1% at 1 year in 9 patients, 75.3% at 2 year in 7 patients, and 66.3% at 3 year in 7 patients. One patient developed Clostridium difficile colitis at 24 months after LSG. Anemia and intermittent diarrhea were detected at 30 months after LSG in 1 patient due to newly developed Crohn’s disease. Nine (90%) patients did not develop anemia, protein, vitamin or mineral deficiency. There was no postoperative morbidity or mortality.

Conclusion: The LSG is a safe and effective treatment for morbid obesity in IBD patients. Strict observation of postoperative symptoms including diarrhea, abdominal pain and gastrointestinal bleeding after LSG in IBD patients must be emphasized. The prospective comparative study with other procedures is needed to determine the best treatment of choice in morbidly obese patients with IBD. 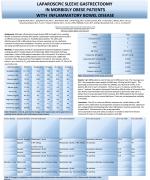