Objectives: Laparoscopic resection of gastric gastrointestinal stromal tumor (GIST) had has been widely accepted as a safe and feasible approach. Laparoscopic single-port surgery is currently emerging as the next evolution in non-invasive surgery. We present our first experience of single-port laparoscopic gastric wedge resection for an extramural gastric GIST via a single umbilical incision.
Methods: A 75-year-old female was planned for a resection of a gastric GIST, 5cm in diameter which was located in the lesser curvature of corpus of the stomach. A wound retractor and surgical glove as the single-port device was placed through a 3-cm umbilical incision. A combined method was applied using both straight and roticulated instruments. Wedge resection was carried out by using single endoscopic staple. The procedure was completed successfully without any perioperative complications.
Results: Total operative time was 129 minutes, and estimated blood loss was less than 10ml. Postoperative course was uneventful and the length of hospital stay was 5 days. Final pathological diagnosis was gastric GIST.
Conclusions: We demonstrated the technical feasibility of laparoscopic single-port gastric wedge resection and we emphasize that the extramural gastric GIST is a good indication for this procedure. 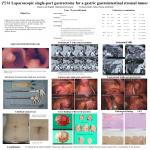