Background
Obesity is not only a health problem in western countries, but also in Korea. Prevalence of obesity in adults is 32.4% which is a remarkable change over the last 10 yeas. The first LRYGB performed in 2003 and the Lap Band® was approved for use in Korea in 2004. There were no data of gastric bypass and adjustable gastric banding regarding weight loss as well as impact on the pre-existing comorbidities up to date.
Methods
St. Mary’s Hospital Center, main leader of bariatric surgery in Korea performed 204 weight loss operations(LRYGB=121, LAGB=83) for morbid obesity. We retrospectively reviewed a series of bariatric cases and examined changes of weight loss, postoperative complications, and pre-existing comorbidities between two procedures.
Results
There were no significant differences in age, BMI, sex distribution, pre-existing comobidities in two procedures. Patients undergoing LRYGBP had longer operative times, more blood loss, and longer hospital stays. There is significantly different regarding postoperative complication(p<0.05) but neither mortality nor pulmonary embolism with both procedures. %EWL of LRYGB at 12 months,24 months,36 months were 76.9%, 79.7%, 85.8% and %EWL of LAGB were 46.8%, 55.1%, 63.3%, respectively. Patients in the LRYGB who has dyslipidemia, sleep apnea, DJD, DM were more likely to improve than the patients after LAGB at early post operative period.
Conclusions
The results of our initial study indicate that LRYGB and LAGB are technically feasible and safe. It is a low rate of major postoperative complications without mortality. LRYGB and LAGB are quite satisfactory and promising bariatric procedure with significant weight loss and improvement of obesity related metabolic comorbidities in Korean. 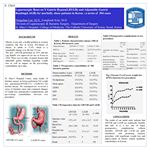