Results: The mean operation time was 567 min and the mean postoperative hospital stay was 10.6 ± 4.8 days. Mean tumor-free margin for HCC was 3.0 ± 5.8 cm. There were no deaths or major complications. Two complications occurred and were managed by percutaneous drainage. Three conversion to laparotomy occurred due to insufficient tumor margin in the early era of our experiences. Extended RPS (n = 6), which is composed of RPS and resection of RHV, was performed to obtain enough margin, when tumor was very close to RHV. 5-year overall and disease-free survival rate of patients with HCC was 66.5% and 37.8%, respectively.

Conclusion: Laparoscopic RPS is feasible in the hands of experienced surgeons, but more refinement of surgical technique is required to reduce operation time. 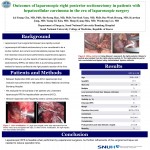