The Hartmann’s procedure, consisting of sigmoidectomy, rectal stump closure and terminal colostomy, was originally performed only in case of neoplastic obstructions, but current indications include also complicated diverticulitis, traumatic colonic lesions, volvulus and perforated recto-sigmoid tumors. So there has been recently a growing number of patients undergoing a Hartmann’s procedure (HP) and, subsequently, waiting for their continuity to be restored. But, reestablishing continuity after a Hartmann’s procedure (Hartmann’s reversal, HR) is considered a major surgical procedure and carries serious risk of both morbidity and mortality.

The aim of this study was to assess the short- and mid-term outcome of laparoscopic restoration of bowel continuity after Hartmann’s procedure.

A prospectively collected database of colorectal laparoscopic procedures (over 800) performed between june 2005 and june 2013 was used to identify 20 consecutive patients who had undergone laparoscopic reversal of Hartmann’s procedure (LHR).

Twenty patients (15 males, 75%), with a median age of 65.4 (Interquartile Range [IQR]:53.1-72.1) and BMI of 25.8 (IQR:23.9-28), had undergone LHR attempt over an 8-year period. There were 14 (70%) and 6 (30%) ASA II and III patients, respectively. Ten (50%) had undergone surgery for perforated diverticulitis, 3 (15%) for cancer, 7 (35%) for other reasons, including volvulus, post-traumatic perforation, sigmoid perforation from foreign body. Previous HP had been performed laparoscopically in 3 patients and with open surgery in the remaining 17. The median operative time was 162.5 min (IQR:127.5-217.5). All the 20 procedures were completed laparoscopically and performed by two surgeons. We did not encounter intraoperative complications, although the operation lasted longer in patients with severe adhesions from previous open surgery. Post-operative mortality and morbidity were respectively 0% and 10%, including one patient with pneumonia and another one with bowel obstruction from post-anastomotic stenosis (not reported in pre-operative colonoscopy of the rectal stump) which required resection and re-do of the anastomosis. According to the Dindo-Clavien classification of complications, one was grade I and one grade IIIb. Median time to first flatus was 3 days (IQR:3-4) and median time to normal diet 5 days (IQR:4-5). Median hospital stay was 9 days (IQR:8-10). There was no readmission. We followed-up the patients for a median of 40 months (IQR:20-55). They were all doing well and were satisfied with the operation: when asked, all 20 (100%) said they would undergo the operation (LHR) again. Three (15%) had been re-operated of laparoscopic mesh repair for incisional hernia, during follow-up.

When performed by experienced surgeons, LHR is a feasible, safe and reproducible operation, which allows early return of bowel function, early discharge and fast return to work for the patient. It has a low morbidity rate. Severity of adhesions from previous open and difficulties in finding the rectal stump may prolong the duration of the operation and eventually require conversion. 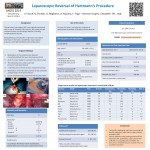