INTRODUCTION
Acute small bowel obstruction (ASBO) has been traditionally treated by laparotomy. Laparoscopy has emerged as an alternative but it is not widely accepted. The aim of this study is to show our initial results of the laparoscopic approach to ASBO in an universitary center.

METHODS AND PROCEDURES
A retrospective analysis of our prospectively collected clinical database. A laparoscopic approach was done in 30 out of 470 ASBO cases between June 2006 to June 2011. Demographic data and surgical variables, such as final diagnosis, surgery performed, technique to access to peritoneal cavity, conversion to open surgery, bowel resection, operative time, time to refeeding, complication and mortality were recorded.

RESULTS
Thirty (6.4%) cases were identified, 47% male, mean age 47 ± 12 years (range: 25-72). Seventeen patients had prior surgeries and thirteen had no previous intra abdominal surgeries. The technique selected to access the peritoneal cavity was Veress needle insertion in 5 patients (17%), Hassan technique in 13 (43%) and direct visualization with optic insertion in 12 (40%). There were no injuries to any organ with any selected technique. Laparoscopic exploration and resolution of the ASBO was possible in 25 (83%) patients, there were 5 conversions, 2 due to bowel ischemia and resection, 1 due to tumor resection, 1 due to difficulty lysis of adhesions and 1 due to uncertain diagnosis. Mean operative time was 69 ± 39 minutes (range: 25-180), but if converted patients are excluded, mean operative time is 56 ± 27 (range: 25-130). Refeeding was done 49 ± 31 hours after surgery (range: 24 to 120) and hospital discharge was done 4,9 ± 2,3 days after surgery (range: 2-9). There were no reoperations in the same hospital admission and. There were only 1 atelectasis as a complication and we had no mortality in our series.

CONCLUSIONS
Laparoscopy seems a feasible and safe approach to ASBO, especially in patients with no previous intraabdominal surgeries. In our series, we show a high rate of diagnosis accuracy (97%) and surgery could be concluded by laparoscopy un 83% of cases, similar to data reported in literature. 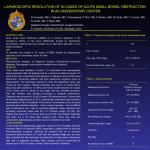