Laparoscopic repair of the hernia defect was performed with full reduction of the hernia contents and excision of the hernia sac. Primary diaphragmatic defect closure was performed. This was reinforced with synthetic absorbable mesh and transfascial tacking sutures. The patient was successfully extubated in the operating room. Following reduction, improved right lower lobe expansion and less cardiac mass displacement was noted on postoperative radiography. The patient tolerated a regular diet and was discharged home on post-operative day 4 on room air. During follow up at 3 months, the patient noted marked improvement in baseline dyspnea, with no further nausea or chest pain. She remained liberated from home oxygen.

First described by Morgagni in 1769 from autopsy, Morgagni-Larrey hernias are rare. They account for up to 3% of congenital diaphragmatic hernias. These may also be referred to as retrocostoxyphoid, retrosternal, substernal, or subcostosternal hernias. While usually identified and reported in children, most of these are identified incidentally in the adult population. Patients may commonly report epigastric pain, nausea, vomiting, or early satiety. The most common herniated visceral contents reported is omentum. The next most common include transverse colon (60%) and stomach (12%). While plain film may identify most defects, computed tomography (CT) is better at defining pertinent anatomy. CT has been reported as an accurate preoperative tool in 70 to 83% of patients. A Morgagni defect may be delineated from other cardiophrenic masses by the presence of radiating linear or curvilinear densities consistent with omental blood vessels.

Repair is indicated in most patients. Both transthoracic and transabdominal surgical repairs have been described. Most modern series describe the transabdominal approach as the most favored. Minimally invasive techniques by both thoracoscopic and laparoscopic methods are described. Most surgical series describe both primary and patch repairs with low morbidity, high success, and low recurrence rates up to 4 years. 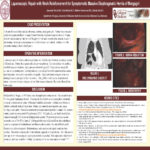