Introduction
A prevascular hernia is a rare type of femoral hernia in which the neck lies anterior to the femoral vessels rather than medial to them in the femoral canal. They are thought to account for less than 1.5% per cent of all femoral hernias and usually present as a painful lump in the groin. The diagnosis is often only made at the time of operation. Obturator hernias are uncommon, accounting for between 0.05% and 1.4% of all hernias. They present routinely with pain in the groin or medial thigh and as emergencies with small bowel obstruction when they are often discovered at laparotomy. This article summarises the literature on prevascular and obturator hernias. It also reports the first case in the literature of a patient with a prevascular femoral hernia treated successfully by laparoscopic pre-peritoneal mesh repair in a rare case associated with ipsilateral obturator and classical femoral hernias.

Case Report
A 30-year old female presented as an emergency with a lump in the right groin. She complained of severe pain at the site of the lump and radiating to the medial thigh. The patient had previously undergone open repair of a prevascular femoral hernia using a mesh plug through a low anterior groin incision. Clinical examination revealed a non-reducible, tender lump in the right groin. Urgent laparoscopy was performed via the trans-abdominal, pre-peritoneal approach. A recurrent, right prevascular femoral hernia was identified with its neck situated directly anterior to the femoral vessels. After mobilisation and retraction of the peritoneum, a classical femoral hernia and an obturator hernia were identified on the ipsilateral side. All three hernias were reduced and successfully repaired using a pre-peritoneal polypropylene mesh. The peritoneum was closed with a continuous suture. The patient made a routine recovery and was discharged on post-operative day two. At seven months after surgery the patient had no clinical signs of recurrence or other complications.

Discussion
Prevascular hernias pose a unique difficulty in treatment due to the lack of a posterior ligamentous structure for suture placement. Various approaches have been attempted, including infra-inguinal, trans-inguinal and preperitoneal dissections. Mesh plugs, flat-profile meshes and suture/tissue reconstructions have all been tried. Despite the range of techniques used, no consensus on a preferred method has been reached. The difficulty in diagnosis and problems suturing the defect or securing mesh from below suggest that prevascular hernias would be ideally suited to laparoscopic repair with a pre-peritoneal mesh.

Obturator hernias can be repaired successfully via a range of approaches depending upon the clinical setting. Emergency presentations with intestinal obstruction usually undergo laparotomy regardless of whether the diagnosis has been made preoperatively. Successful laparoscopic repair of irreducible obturator hernias has been reported when there is no compromise in viability of the small bowel, however most are still treated by laparotomy.

Conclusion
Prevascular femoral hernias are rare, coexist with other variants of groin hernia, they are potentially difficult to treat and are ideally suited to investigation and repair by laparoscopic means. 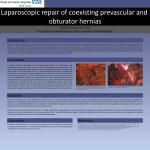