Fitz-Hugh-Curtis is a rare complication of pelvic inflammatory disease (PID) that is characterized by ascending gonococcal or chlymadial infections that cause perihepatitis. This leads to adhesive bands developing between the liver and the anterior abdominal wall, and causes the pathognomonic ‘violin string’ appearance. Surgical intervention for Fitz-Hugh-Curtis has infrequently been reported in the literature. This case report demonstrations an unusual presentation of this disease in a female with no evidence of PID. A 50 year old female initially presented to the emergency department with a one day history of acute onset of right upper quadrant abdominal pain. She described the pain as constant, cramping and non- radiating. Associated symptoms included nausea and several episodes of vomiting. Her last bowel movement was one day prior to the onset of pain. Past medical history was significant only for hypertension. She denied any past surgical history, did not take any medications, and did not have any allergies. On physical exam her abdomen was distended, tender to palpation most prominently in the right upper quadrant but not peritoneal; the remainder of the exam was benign. CT scan revealed a transition point in the right upper quadrant with a loop of distended small bowel residing on top of the liver, consistent with a small bowel obstruction possibly from an internal hernia. An NGT was inserted and almost 1L of gastric contents were immediately returned. The patient was taken to the operating room for a diagnostic laparoscopy and was found to have incarcerated small bowel amid dense adhesions between the anterior abdominal wall and the liver; most likely secondary to Fitz-Hugh-Curtis. The small bowel was laparoscopically reduced and the all adhesions were lysed using electrocautery. The patients’ NGT was removed, her diet was advanced, she had return of bowel function, and she was discharged home without complication. She denied any history of pelvic inflammatory disease or sexually transmitted diseases, but was referred to gynecology for follow up. Fitz-Hugh-Curtis can be a significant cause of RUQ abdominal pain, occurring mostly in women of child- bearing age. This condition and its potential complications should be included on the differential diagnosis when evaluating a patient who presents with similar symptomatology. This case report exhibits how a small bowel obstruction secondary to Fitz-Hugh-Curtis can be successfully managed using minimally invasive techniques. 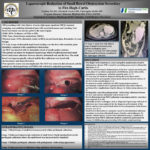