Laparoscopic Redo Left-sided Colorectal Resection with Anastomosis: Are There Advantages?

METHODS AND PROCEDURES: After IRB approval, the medical records of all patients who underwent redo left-sided colorectal resections with anastomosis between August 2001 and July 2012 were reviewed. Demographics and perioperative outcomes were compared between patients who underwent laparoscopic or open approaches, in an intention-to-treat manner. Fisher’s exact, chi-square, and Student’s t-tests were performed for statistical analysis.

RESULTS: Forty patients (mean age 56.8 years, 41.5% male) underwent 41 redo left-sided colorectal resections (n = 12 laparoscopic; n = 29 open). Five (41.5%) of the 12 patients in the laparoscopic group were converted to open. The 2 groups were not significantly different in demographics, ASA score, comorbidities, number of previous surgeries, and time between primary surgery and redo resection. More patients in the open group had undergone a previous open approach. The most common surgical indication was anastomotic stricture, and the most common redo procedure was low anterior resection with colorectal anastomosis in both groups. A diverting stoma was used significantly less often in the laparoscopic versus open group (33.3 vs. 72.4%, p = 0.03). The mean (± standard deviation) operative time was 231.3 ± 73.7 minutes, and mean estimated blood loss was 469.5 ± 490.8 mL, with no difference between groups. Intraoperative complications occurred in 2 patients in the open group, including 1 vaginal and 1 bladder injury. The overall and surgical morbidity rates were 56.1% and 51.2%, respectively, with no significant differences between groups. A trend towards a lower wound infection rate was observed in the laparascopic group (16.7% vs. 51.7%; p = 0.07). The rate of severe complications (DINDO ≥ 3; 8.3% vs. 10.3%) and postoperative hospitalization days (8.5 vs 7.8) were not significantly different between the laparoscopic and open groups, respectively. Further analysis did not reveal any differences in the outcomes of the converted versus completed laparoscopic cases. There was no postoperative mortality in either group.

CONCLUSIONS: Laparoscopic redo left-sided colorectal resection with anastomosis is feasible and safe. The outcomes are comparable to those of laparotomy, with the known potential advantages associated with the minimally invasive approach; conversion does not adversely affect the outcomes. 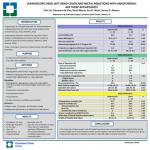