Objective: In several classic trials comparing laparoscopic versus open colectomy, splenic flexure cancer was excluded. On of the most important reasons was the technical difficulty of laparoscopic splenic flexure mobilization. Separating left Toldt’s fascia was prior to entering the bursa omentalis in conventional laparoscopic left hemicoletomy. However, in this approach, identifying pancreas is very demanding, especially for fatty patients, and it is easy to enter the retro-pancreatic space for unexperienced surgeons. Herein, we introduce a bursa omentalis approach for laparoscopic radical left hemicoletomy to facilitate splenic flexure mobilization and explore its safety and feasibility.

Methods: Firstly, the left part of gastrocolic ligament was dissected and the bursa omentalis was entered (Fig.1). It was easy to identify the middle colic vessel and inferior mesenteric vein. The anterior lobe of the mesentery of transverse colon was dissected at the inferior border of pancreas from right to left (Fig.2) and a piece of gauze was placed at the inferior border of pancreas for introduction (Fig.3). Secondly, the left Toldt’s fascia was dissected at the level of the sacral promontory (Fig.4). The left Toldt’s space was expanded cephalad and the pancreas was identified clearly with the introduction of the gauze (Fig.5). Meanwhile, the inferior mesenteric artery and vein were ligated at root (Fig.6&7). It was easy to combine the left Toldt’s space and bursa omentalis. Thirdly, the lateral attachments of the descending colon were completely mobilized and an extracorporeal side-to-side anastomosis was performed with an umbilical incision.

Results: 32 patients with splenic flexure cancer underwent laparoscopic radical left hemicoletomy using a bursa omentalis approach. No intra-operative complication was recorded. The mean operative time was 134.2±27.6 min containing a mean laparoscopic manipulation time of 65.7±14.5 min. The mean estimated blood loss was 50.7±20.8 ml. The mean first time of flatus was 41.5±12.1 hours and the time of fluid intake was 47.2±13.5 hours. One patient developed a wound infection and was cured with percutaneous drainage and was discharged on 15 days after surgery. The mean hospital stay was 6.4±2.0 days.

Conclusions: Our initial results suggest this? apparoach for laparoscopic radical left hemicoletomy may be safe and feasible approach especially for unexperienced surgeons. The main advantages of present approach contain easy to identify pancreas when expanding the left Told’s space and simple to mobilize the splenic flexure in laparoscopic condition. 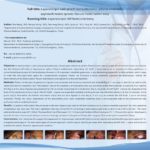