Biliary leaks following laparoscopic cholecystectomy (LC) have been reported in up to 1.1% of patients. After diagnosis, the typical management consists of endoscopic retrograde cholangiopancreatography (ERCP) and stent placement. Bile duct perforation by the stent is an even more rare complication and its true incidence is elusive in the literature. Case summary:A 30 year old female underwent an outpatient LC then developed severe abdominal pain 5 days after surgery. She was re-admitted and diagnostic studies confirmed a biliary leak. The patient was sent for ERCP with stent placement. However, the day following the procedure she developed increased leukocytosis and liver function tests as well as peritoneal signs. She was taken to the operating room for diagnostic laparoscopy which revealed the proximal end ofa 7 french stent exiting the anterior wall of the common hepatic duct just above the cystic duct. Proximal and distal cholangiography revealed patency of the proximal common hepatic and distal common bile ducts. After kocherizing the duodenum the the bile duct was primarily repaired over the stent using intracorporeal suturing techniques. A blake drain was left in the sub-hepatic space perpendicular to the stent. The serum bilirubin normalized immediately following surgery and the patient was discharged after 6 days. The blake drain was removed in the office two weeks after surgery. 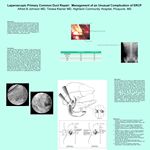