BACKGROUND AND OBJECTIVES: Liver resection by open surgery remains the treatment of choice for hepatocellular carcinoma (HCC). However, open surgery with a large skin incision carries the possibility of liver failure and postoperative severe ascites in patients with advanced liver cirrhosis, because large skin incisions lead to interruption of large collateral veins. Currently, laparoscopic liver resection is preferred to avoid postoperative liver failure and severe ascites in these circumstances. Laparoscopic partial liver resection (LLR) for the treatment hepatocellular carcinoma with Child- Pugh B and C cirrhosis was compared to open partial liver resection(OLR) performed in our institution and examined validity of the LLR.

METHODS: Seventeen LLRs performed for HCC at the Saitama Medical University International Medical Center from 2007 to 2011 were prospectively analyzed. Seventeen cases LLRs performed included Child-P B 15 and C 2 cases. These data were compared with an equivalent group of 9 consecutive OLRs (C-P B: 9 cases) undertaken immediately prior to the introduction of LLR. Outcomes were evaluated for differences in perioperative morbidity and hospital length of stay.

RESULTS: There were no differences between LLRs and OLRs in demographics, pathology, cirrhosis, tumour location or extent of resection. There were no LLRs underwent conversion to an open approach and no deaths. LLRs had significantly decreased intraoperative blood loss (60 ml versus 553 ml, p < .001), postoperative complications (6% versus 33%, p < .05), and length of stay (7.1 versus 16.1 days, p < .001) compared with OLRs. There were no differences in operating time for LLRs compared to OLRs (199 min versus 152 min, respectively).

CONCLUSION AND DISCUSSION: Laparoscopic resection of HCC with underlying Child-Pugh B and C liver cirrhosis is feasible and safe. In patients with severe liver cirrhosis, LLR minimizes the disturbance in collateral blood and lymphatic flow caused by laparotomy and liver mobilization, as well as the mesenchymal injury caused by compression of the liver. It limits complications such as massive ascites, which can lead to severe postoperative liver failure. 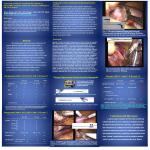