Methods: An IRB approved review of a prospectively collected database of all patients undergoing LPH and LVH between 2009 and 2012 at a single institution was performed. Propensity scores were utilized to match LPS and LVH of close clinical profile (3 to 1 match). Patient demographics, comorbidities, perioperative details, and complications were recorded between the groups.

Results: 20 patients underwent LPH during the study interval and were compared to 60 LVH. Groups were matched from the standpoint of age, bmi, smoking status, ASA, estimated blood loss, defect size and mesh size. Operative time was longer in LPH than LVH (172 +/- 35 vs. 94 +/- 32 min., p<0.01) and hospital length of stay was greater in LPH than LVH (3 days, interquartile range 2-5.5 days vs. 1 day, interquartile range 1-2.8 days, respectively, p<0.01). There was no difference in overall wound complications, superficial skin and soft tissue infections, or seromas between groups. No mesh infections occurred in either group. Hernia recurrence rate was similar between groups occurring in 5% and 1.7% of LPH and LVH respectively, p<0.01.

Conclusions: Laparoscopic repair of parastomal hernias utilizing a Sugarbaker technique may be safely performed with a low incidence of complications and recurrences. Hospital stay and operative duration are significantly longer in patients undergoing LPH than LVH, although this did not impact longer term outcomes. Laparoscopic parastomal hernia repair results in similar long-term outcomes to laparoscopic ventral hernia repair. 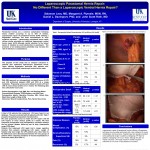