Methods and Procedures: Retrospective review of patients who underwent laparascopic PEH repair and anterior gastropexy at the Penn State Hershey Medical Center. Electronic charts were reviewed and telephone interviews were conducted by a surgeon. The scale for assessment of GERD and dysphagia symptoms (Swanström et al) was administered.

Results: 20 patients underwent laparoscopic PEH repair with mesh and suture posterior cruroplasty and anterior gastropexy or percutaneous gastrostomy. The mean age was 73 years (range: 35 to 93 years). 80% (16) of the patients had reflux symptoms preoperatively and four had that as their chief compliant. Out of these, 80% (13) were on acid reducing medications preoperatively. 60% (12) of the patents had dysphagia. Other preoperative symptoms included post prandial abdominal/chest pain (45%, 9 patients), nausea and vomiting (50%, 10), abdominal distention and bloating (40%, 8), and shortness of breath (40%, 8). Two patients presented with acute gastric volvulus. On imaging type III hiatal hernia was noted in 75% (15/20), followed by type IV (3/20; 15%) and II (2/20; 10%). Interestingly, 8 patients were noted to have a chronic volvulus, most commonly organoaxial. Seven patients had preoperative endoscopy and one had esophagitis. 75% of the patients had a diagnosis of gastroesophageal reflux disease preoperatively. Other comorbidities included obesity (60%), hypertension (50%), and history of coronary artery disease (25%). All patients underwent laparoscopic PEH repair with suture posterior cruroplasty and placement of mesh. Ten patients additionally underwent suture anterior gastropexy and the remaining ten underwent percutaneous gastrostomy. The mean OR time was 105 minutes (range: 70 to 164). The median length of stay was 3 days (range 1 to 11 days). There were no operative mortalities. The mean follow up was 11 months (range; 1 to 33 months). Post operatively seven patients continued to have reflux. Only one of these had daily symptoms but notably was not on acid reducing medications. Dysphagia improved in all but one patient. Overall there was a 55% decrease in the percentage of patients with reflux and 91% decrease in percentage of patients with dysphagia.

Conclusion: There was no significant worsening of reflux or dysphagia symptoms in patients undergoing laparoscopic PEH repair with gastropexy. A considerable decrease in the percentage of patients with these symptoms suggests etiology to be related to the abnormal anatomy. Prospective studies with larger number of patients would help clarify whether these clinically relevant results gain statistical significance. 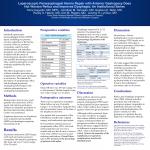