Background: Paraesophageal hernias (PEH) are more common in older patients. Many patients are not referred for repair (LPEHR) due to underappreciated symptoms or concerns that surgical outcomes lead to significant morbidity and mortality. The purpose of our study was to analyze outcomes of initial PEH repair in elderly patients.
Methods: All patients undergoing repair of an initial paraesophageal hernia between January 2003 and January 2012 at our center were entered into a prospectively maintained database (n=268). All patients were divided into groups by age (Y<69 and O>70). The older group was further subdivided into YO=70-79 and VO>80. The BMI, Charlson score, operative time, estimated blood loss, LOS, recurrence, QOLRAD scores, morbidities and mortality were compared using Wilcoxon rank sum test.
Results: The mean age of patients in Y (n=141) was 56.2 [range 32-69] while in O (n=127) the mean age was 77.4 [range 70-98] Subgroup YO had 82 and VO had 45 patients. The older group O had a significantly greater Charlson score than Y (5.17 v 1.96; p<0.001). Charlson score was also significantly higher for both YO (4.76) and VO (5.91) compared to Y (p<0.001). BMI was higher in Y (31.4) than O (28.2; p< .001). There was no difference in operative time or EBL for the groups.
The mean LOS was significantly shorter for Y (2.44) compared to O (3.84; p<0.001). Overall morbidity was greater in O (23.6%) vs Y (13.5%; p=0.034) as was the need for ICU (O=9.45% vs Y=1.47%; p=.007). There was no difference between the need for postop ventilator support between the Y and O groups, but when subgroups were compared it was higher in VO (Y=1.4% vs VO=11.1%; p=0.003). Re-operation within 30days was more common in the older group O (5.5%) than the younger Y (0.73%; p=0.02). There were no differences between the groups in the leak rate or need for transfusion. All repairs were completed laparoscopically. Mortality was 0.75% for all patients, with only 1 death in each group (Y,O).
The mean follow up was 23.7 months for all patients with no significant differences between any of the groups. Symptomatic PEH recurrences were similar between the groups (Y=4.4% vs O=3.2%; p=0.61). There was a significant improvement in QOLRAD scores in both groups (Y 107.3 to 161.7, p<0.001and O (104.7 to 166.1, p<0.001), however the improvement in QOLRAD scores was not significantly different between groups (Y=54.4 vs O=60.0; p=0.51).
Conclusion: As expected, patients > 70 years old with symptomatic PEH had more co-morbid medical problems than younger patients. These factors did not preclude LPEHR although they did lead to greater morbidity, LOS and re-operative rates. Despite these factors, the mortality rate was very low for both groups. At 23 months follow up, the clinical benefits of LPEHR were also significant and similar for both groups with very low recurrence rates. The decision to perform LPEHR in elderly patients remains challenging, but the procedure can be done safely and is effective in these patients in experienced centers. 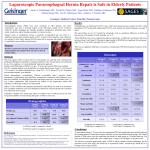