Introduction: Chronic Pancreatitis is fairly common in South-east Asian countries. There are considerable differences in morphology of South-East Asian patients' pancreas when compared to the west. We observe main pancreatic ducts which are more dilated, having fewer strictures, but more calculi.

Modified Puestow's Procedure is the gold standard drainage procedure for chronic pancreatitis. Laparoscopically, the pancreatico-jejunal anastomosis is usually performed in sutured manner. Endostapler anastomosis has been described once earlier by Glaser et al in 2000. However, there are no guidelines at present concerning its use.

Materials & Methods: Over a period of 8 years, 26 cases of chronic pancreatitis who were deemed to benefit from surgical intervention, were enrolled for laparoscopic pancreaticojejunostomy. Pre-operative radiological evaluation of main pancreatic ducts was performed & those with ducts larger than 10mm diameter (i.e. large enough to permit insertion of endostapler anvil) were planned for endostapler anastomosis, while the remainder were completed with purely sutured technique.

Results: The procedure was undemanding, and reduced operating time in the selected cases. They suffered from no significant complications & had an uneventful post-operative recovery. Only a single case with duct larger than 12mm was converted to an open procedure due to finding of an abnormally supple pancreas which hindered duct localization in absence of laparoscopic ultrasound. Patients were followed up for a minimum 6 months post-operatively & were found to remain symptom free with improvement in digestive function evidenced by weight gain.

Conclusion: We opine that endostapler pancreatico-jejunostomy is a viable alternative in grossly dilated ducts with diameter of haed and body more than 12 mm. It serves to reduce operative times and is technically less challenging. In our small sample size, we did not observe any detrimental effects. Further evaluation of the procedure has potential to reveal a diminished complication rate. 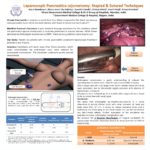