Results: 59 patients who underwent SILS colectomy and 33 patients who underwent HAL colectomy were reviewed. The data set included 50% men, and the patients had a mean age of 67.27 (range 28-88) years and mean BMI of 28.53 (range 17.0-47.8); there were no significant differences in these variables between the two surgical groups. 79.66% versus 54.55% of SILS and HAL cases were right colectomies, respectively, with the remainder grouped as left/sigmoid colectomies. Mean operative times for SILS and HAL colectomy were similar at 142.31 minutes and 142.48 minutes, respectively, but a t-test for non-inferiority, with a non-inferiority margin of five minutes, was not statistically significant (p-value=0.36). Additionally, a multivariate regression for operative time did not indicate that surgical technique was a significant covariate. No significant difference in complication rate was shown between SILS and HAL colectomy (Fisher exact p value 0.52) or between right and left/sigmoid colectomies (chi-squared p-value 1). 13.56% of SILS cases and 33.33% of HAL cases were converted to open, which was a statistically significant difference (chi-squared p=0.025). After including conversions from SILS to HAL (11.86%), there was no significant difference in overall conversion rates between the two groups (chi-squared test p=0.34). SILS colectomy had a significantly statistically shorter post-operative length of hospital stay (3.71 days) when compared to HAL colectomy (4.67 days) (one-sided t-test p-value 0.018). A linear model for length of stay did not indicate that surgical approach was a significant factor but did show that SILS reduced length of stay by an average of 0.53 days.

Conclusion: SILS colectomy is a safe and viable alternative to HAL colectomy for the surgical management of colon malignancy and benign polyp disease. The single-incision approach can be performed with similar operative times, conversion rates, and complication rates and may potentially shorten post-operative hospital stay. Randomized controlled trials examining these outcomes as well as the role of single-incision laparoscopy in improving post-operative pain, cosmesis, and quality of life are required to more definitively indicate any equivalences or differences in these two laparoscopic approaches. 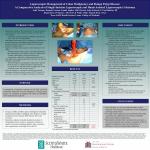