Introduction: Development of an optimal therapy for a subset of patients with locally recurrent hepatocellular carcinoma (HCC), following local therapy such as ablative therapy (AT) and trans-arterial chemoembolization (TACE), is a point of major concern. However, there is no definite recommendation made for the treatment of these recurrent HCCs in the HCC guidelines. In the past few years, laparoscopic liver resection has gained popularity owing to its minimally invasive and highly versatile characteristics. We aim to clarify the feasibility of laparoscopic surgery in locally recurrent HCCs.

Results: Fourteen patients underwent laparoscopic liver resection for LR-HCC (Lap-LR) (post AT: n = 5, post TACE: n = 9), while thirty-five patients underwent laparoscopic liver resection for primary HCC. There were no significant differences in the preoperative status between the two groups except their medical history. The rate of vascular invasion was significantly higher in Lap-LR patients as compared to those observed in patients with primary HCC. The frequency of observing complications with a Clavien-Dindo classification of grade 3a or higher tend to be higher in Lap-LR patients (p = 0.08), although other surgical outcomes, including length of hospital stay, were not significantly different. Twelve patients underwent open liver resection for LR-HCC (Open-LR) during this period. No significant differences in the background status between the Lap-LR and Open-LR groups were observed. Besides the fact that the Lap-LR group showed significantly lower estimated blood loss, there were no significant intergroup differences in surgical outcomes.

Conclusions: Given its high malignant potential, LR-HCC should be resected with the most reliable procedure, which may often need an advanced surgery. However, laparoscopic surgery is markedly safer and more feasible even for patients with a history of repeated HCC therapies and/or impaired liver function. 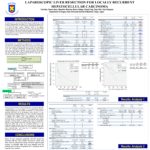