Introduction: Mongolia has the highest mortality rate of liver cancer in the world (six times the global average). While open liver resections are currently being preformed safely in Mongolia, many patients seeking access to minimally invasive approaches to hepatic resection are traveling abroad to receive laparoscopic surgical care. Recognizing the economic burden of traveling abroad for surgical care, Mongolia has been building advanced laparoscopic surgical capability to address hepatobiliary disease through a multinational cooperative capacity building initiative. A single institutional experience of the implementation of laparoscopic hepatic resection in a resource poor country is reviewed.

Conclusion: Laparoscopic hepatic resection is now available to address the large burden of hepatic disease in Mongolia. The implementation of an advanced laparoscopic procedure requires a significant amount of training and resource assistance. As developing economies grow, so does the demand for advanced surgical techniques. To address this demand, and to continue to further strengthen surgical capacity, Mongolian surgeons are working to give their patients the highest standard of quality surgical care through modern surgical techniques locally. Laparoscopic hepatic resection for left lateral resection and small right-sided liver neoplasms can be preformed safely and effectively in a resource-poor country. 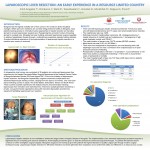