PURPOSE: Purulent or fecal peritonitis is one of the most serious complications of acute diverticulitis. Up to one fourth of patients hospitalized for acute diverticulitis require an emergent operation for a complication including abscess, peritonitis, or stenosis. Open Hartmann’s procedure has been the operation of choice for these patients. The advantages of laparoscopy could be combined with those of the primary resection in selected patients with peritonitis complicating acute diverticulitis. However, due to technical difficulties and to the theoretical risk of poorly-controlled sepsis, laparoscopic resection procedures have seldom been reported for such patients.
METHODS: Data were prospectively collected from 2002 to 2006 in a single referral center specialized in abdominal emergencies. Laparoscopic left colonic resection was performed in selected patients with peritonitis complicating acute diverticulitis.
RESULTS: Forty five patients were studied. The median Mannheim Peritonitis score was 21 (+ 5, 12-32). The conversion rate was 16 %. 30 patients had Hartman’s procedure and 15 patients had immediate colorectal anastomosis. There was no perioperative uncontrolled sepsis. Overall operative 30-day mortality and morbidity rates were 3 % and 23 %. Stoma reversal was possible in 90 % of patients.
CONCLUSION: The indications of laparoscopy for the treatment of diverticulitis could be extrapolated to selected patients with peritonitis. 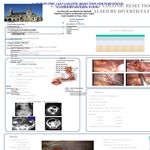